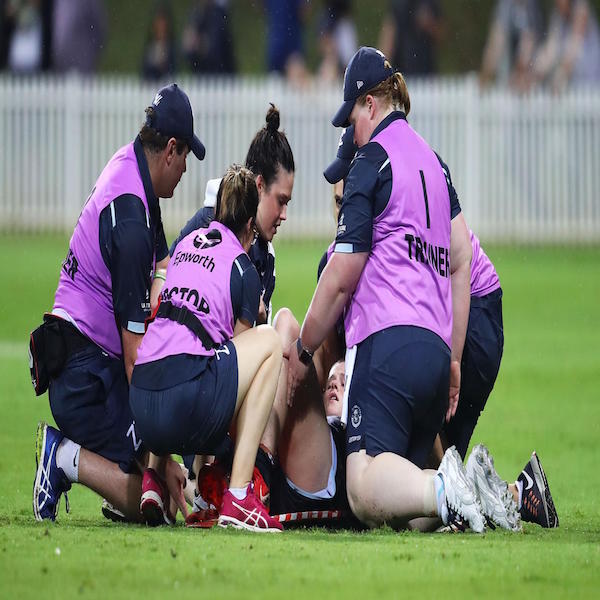 The opening of the AFLW season has seen a spate of season ending knee injuries, including Carlton skipper Brianna Davey who ruptured her ACL against the giants last Friday.

“The main reason is mechanics,” he says. “Females have a wide pelvis and therefore are more bow legged. There’s more of an inclination for their knees to fall in when they twist, so that makes them more susceptible.”

For women and men, an ACL injury can be devastating, writes Physiotherapist Kobi Phelan in her latest blog.

An ACL (Anterior Cruciate Ligament) rupture is one of the most debilitating sporting injuries that can see athletes sidelined from nine to 24 months and beyond. ACL injury occurs most commonly during sports that involve sudden changes in direction, sudden stops or jumping such as football, tennis, skiing or basketball.

For many years surgery has been seen as the best management for sufferers of ACL injuries wishing to return to physical activity. However recently there has been a lot of discussion about non-surgical pathways for ACL rehabilitation being equally as successful for certain people.

Surgery versus no surgery depends entirely on your functional requirements, goals and time for rehabilitation. Whatever your choice, it is a long and mentally tough rehabilitation period after ACL injury.  With around one in three people never returning to sport after ACL injury, a thorough rehab plan is essential for the best outcome. Regardless of the management strategy, achieving full knee extension, regaining quadriceps activation and reducing knee swelling precedes the all-important strengthening and conditioning phases.

For surgical patients, it has been shown that five weeks of intensive pre-operative rehabilitation with the aim of achieving 90% limb symmetry resulted in better knee function two years after surgery (Grindem et al., 2015). For those who are operated on sooner, it has been shown that completing some pre-op rehab results in a higher likelihood of returning to sport and having better knee function post-op (Mansson et al., 2013).

For both surgical and non-surgical patients, returning to sport should be criteria as opposed to time-based. This means, achieving key milestones before progressing to the next level.

Returning to running is only a small component of the overall picture and requires adequate strength and single leg balance prior to being attempted.

I follow a criteria based program by Randall Cooper because it ensures patients achieve Phase 1 functional goals prior to progressing to Phase 2, and so on. Results indicate that of those who met the key goals in Phase 3, only 5 per cent sustained a second ACL injury (Grindem et al., 2016) after returning to sport in Phase 4.

For the best outcomes after an ACL injury it is important to consult a physiotherapist and discuss the most appropriate pathway for you. If you have recently had an ACL injury, come in and see one of our physiotherapists. We will help guide you through your rehabilitation, whether it be pre-surgery, post-surgery or no surgery at all.