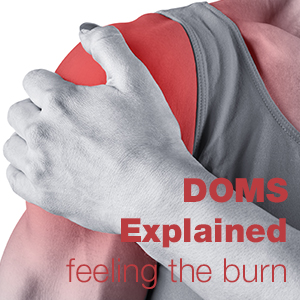 After the decision to start a new health routine or change your usual loading, you may have experienced the familiar soreness whilst trying to get out of bed and find yourself struggling to walk. This phenomenon is known as delayed onset muscle soreness, more commonly referred to as DOMS.

DOMS is related to eccentric muscle contractions, when the muscle in under tension, whilst being lengthened, particularly following unfamiliar or strenuous activity. This results in microscopic damage to the muscle fibres. Delayed onset muscle soreness is typically characterised by reversible pain that peaks 1-2 days after the activity and a decrease in strength, which typically lasts for 3-4 days. Delayed onset muscle soreness is relatively benign as there is less soreness and tissue damage with repeated bouts of the unfamiliar exercise. This indicates a degree of muscle adaptation, allowing your muscles to better perform that activity again.

The pathophysiology of DOMS is still not fully known and therefore many different strategies to combat the negative effects of DOMS (pain and weakness) have been proposed. Most have centred around the notion that DOMS is associated with tissue oedema (inflammation) that can be seen clinically and is evident on magnetic resonance (MR) imaging. To support this, there is some evidence that anti-inflammatory methods are effective in reducing pain and improving function following DOMS. For example, the use of ice immersion, anti-inflammatory medications and Omega 3 supplements have been shown to be effective in reducing the effect of DOMS.

There are, however times when you wonder whether it is more than just DOMS. When should you be concerned?

Injuries may also present during workouts as little niggles or increased awareness of a particular area. A true injury will often limit range of motion and last beyond the time frame of DOMS. This is the time to see a professional.