22 JulOlympic injuries: what will the toll be at Tokyo?

The Olympics symbolise the ultimate in athletic achievement. Athletes train their entire sporting lives for the chance of winning gold. This week, Tokyo will become the first Olympic Games to be held under a state of emergency. Unfortunately, even with the best preparation, some athletes won’t finish their event due to injury.

So what injuries are the most common and in which sports? In the 2016 Rio Olympics, more than 1,100 athletes were injured and 650 became ill. That’s 8% of athletes sustaining injuries and 5% of athletes reporting illnesses. Over the duration of the Olympic Games, we will be unpacking some of the injuries sustained and what they mean for the athletes involved.

At Rio, the sports with the highest rates of injury were BMX, boxing, mountain biking, taekwondo, water polo and rugby, and the incidence of injuries between women and men were nearly identical.

Twenty percent of the injuries sustained were classified as severe, meaning that they missed more than a week of training or competition. For the non-Olympic athlete, some of these injuries may have prevented training and competition for a longer period due to a range of factors.

Firstly, Olympic level athletes are typically in peak physical condition. They have trained their body specifically for the demands of their sport over a long period of time. They also have access to much more medical intervention more consistently. Most of these elite athletes will be able to access physiotherapy multiple times a day to ensure they are back competing as quickly as possible. They also have access to much more technology than most. They have any injuries or niggles imaged much sooner than the average person would, and nothing is left to chance. Everything is planned specifically for the injury and person to enable optimal performance and return to sport as quickly as possible.

At the most recent Olympics, the most injured body parts were the knee, thigh, ankle, face, and lower leg. Out of the 221 severe injuries, the most common injury sustained was a muscle strain. A muscle strain is a tear in the muscle fibres which most often occurs due to an over stretching or a powerful contraction that is too much for the muscle to handle. The most affected muscle complex are the hamstrings, which is why we hear about hamstring tears so often.

There were also 57 ligament sprains and ruptures, which is a tearing of the fibres which make up the ligament. Ligaments connect bones to other bones and provide stability for our joints. The ankle ligaments are the most commonly sprained due to the high stress during sport. 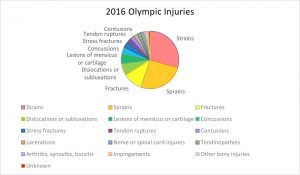 Almost three quarters of the injuries occurred acutely, meaning there was no overuse or pre-existing component. This is to be expected as the athlete’s training programs up to the Olympics are typically planned with precision to optimise performance and minimise the risk of injury in the lead up to, and during the games.

These statistics go a long way to show that you can have your body in the best shape possible and train perfectly, but sometimes things just happen. While injury prevention is extremely important, we cannot bullet-proof our bodies against everything. For the best possible chance of preventing and managing injuries before and during the games, specialist medical teams work together with the athlete and coaching staff. These teams may include physiotherapists, exercise physiologists, strength and conditioning coaches, doctors, dieticians, psychologists, and other health professionals.

Physiotherapy is the largest single professional discipline within the multidisciplinary team at the games. The modalities most commonly utilised by physiotherapists at the Olympics are massage, mobilisation, taping, cryotherapy and exercise prescription. This is largely similar to the treatments our physiotherapists use in the clinic. Physiotherapists also work closely with the non-injured athletes to enable them to recover well and prevent injuries occurring.

Looking forward to the 2020/21 Olympic Games in Tokyo, it will be interesting to see what the prevalence of injury is like, especially given that many athletes had their training disrupted in one way or another by the coronavirus pandemic. The Rio Olympic Games had a slightly lower injury rate compared with the previous couple of Olympic games, so will this trend continue?

If you are interested in learning more about injury prevention specific to you and your sport, book an appointment with one of our CSSM physiotherapists.

If you are training for another event and are concerned about an injury or a niggle, seeing a physiotherapist as soon as possible will help you to understand what is going on and what you need to do to prevent it getting any worse and enable you to perform at your best.

Physio Sally Lynch enjoys all aspects of physiotherapy but has a particular interest in the musculoskeletal side of the profession most and this interest has directed her career so far.

With a love of all sports including soccer, Sally studied at Charles Sturt University in Albury before moving to Melbourne to play for Collingwood in the VFLW in 2019.Having previously worked in the disability industry, Sally found it extremely rewarding to help empower people with disabilities to reach their goals.