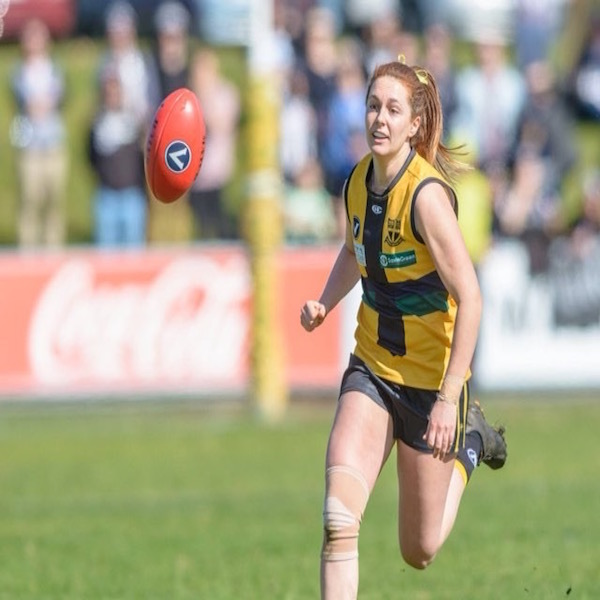 Tash Rappos is one of CSSM’s sponsored athletes. The 25 year old currently plays in the VFLW for St Kilda.

In this latest blog, Tash talks about being a part of the changing face of women’s footy.

I love the team aspect and companionship that is involved in footy. Some of my best friends I met through football, and I’m talking back when I was 17 in youth girls, so over 8 years ago, we live across the state but still manage to make time for each other.

I also love when you practice a certain play at training then watch it come together on the field, it is very rewarding to see all of our hard work pay off.

All of these girls put in so much effort and watching us all gel together is something special.

My predominant team at the moment is St Marys Salesian, which is based at Ferndale Park in Glen Iris.

I am still currently signed on with St Kilda in the VFLW, but a few injury and illness setbacks have caused me to shift my focus from footy to my health.

So I will be pushing hard with SMS for the rest of the season and reassess for next year.

My best memories are from 2013 where the team I was playing for won the premiership, and I got the BOG for the match, and then I also managed to win league best and fairest for that year. That was pretty amazing.

Although I think last years may top it. The inaugural season for SMS, with an abundance of first year players, making it to the grand final. And just watching how far we had all come as a team. We had lost to the opposition in the semi by just one point. But we managed to get on top in the grand final by just one point. I had actually thought we lost the match when the siren went. But I saw a sea of yellow (SMS team colour) come racing towards me as I was on my knees in a heap on the ground. And we had won! It was an amazing feeling. I also managed to get BOG for that match as well which was pretty special. That year I was also a part of the inaugural VAFA squad and came third in the league best and fairest too. Then to top it off I helped organise a very successful end of season football trip for the girls.

I’ve been playing footy for about 8-9 years. I started in the youth girls competition in the western district, and after graduating high school made the move over to the east for uni. I’ve had a few years off in there somewhere as well for work and travel.

Right now, I’m taking it one day at a time. So my main goal at the moment is to play my best and help cap off another successful year for SMS.

I’m hyperaware of the injuries that can occur so I am very diligent with my prehab and focusing on being strong and doing proper warm ups before trainings and games.

As for future goals, I will reassess after the season is done. AFLW is indeed in the mix, but alas, life can get in the way.

Two of my teammates did their ACL’s last year and another two of my friends have done them this year.

I do a lot more training outside of footy trainings, a lot of gym, prehab, yoga, Pilates and F45. Having previous ankle and shoulder injuries last year brought me into Camberwell Sports and Spinal Medicine as a frequent client. My Physio’s (yes their were two, Jess and Alice), helped me rehab my ankle and shoulder and gave me extra exercises to strengthen my posterior chain to help prevent knee injuries, in particular, ligament tears.

Before training and games I use therabands in my own activation warm ups, which involve squats, crabwalks, two legged and one legged hops, hip thrusts – just a lot of exercises that activate the glutes and wake up the stabilising muscles of the legs. And our warm ups have increased a lot from last year and include a lot of change of direction and lateral movements.

Foam rolling and deep tissue massages also help a lot with releasing tension throughout my legs and my whole body.

Monday’s: Lower body posterior at the gym, then football training

Tuesday’s: F45 (their resistance day) so it’s normally full body resistance, taking it very easy on the legs, I would also ideally like to get a cardio session in, so a bike ride or run

Thursday: Lower body anterior at the gym, and football training

Friday: I will either use as a rest day or upper body, depending on how I’m feeling

Sunday: Yin yoga which really just feels like a good stretch session and some meditating

I started off with seeing an osteo for a shoulder injury, who helped with that a lot before referring me to the physio to further the recovery and rehab. I also take full advantage of the myotherapists and podiatrists at the clinic. I like to look after my body holistically in that sense.

When I was at the peak of my injuries, I was coming in weekly for check ups, treatments, and progressions for my rehab.

Since then, I haven’t actually had a biomechanical injury. I still use exercises that were prescribed to me for my injuries. And I’ve been through the physio Pilates program, just about to go into the Pilates FIT sessions. I also see a myo regularly which helps a lot with releasing tension in my upper back and legs especially.

I think it certainly helps and has had a positive impact on my recovery. It has definitely put me at ease in terms of knowing my boundaries and how hard or far I can push myself when getting back out there.

The best advice I’ve been given is to do what you love and what you’re passionate about. Work hard and don’t expect change or progress overnight. It will come if you put in the effort. But make sure you love it, because if you don’t make it to the top, you need something else to drive you through the hard times.

In 5 years it would be nice to see the AFLW up and about, inspiring future generations to jump on board from a younger age. I hope it will be running longer than the 8 weeks over summer, and that each team will have a VFLW team aligned with it. The pay for these girls ideally would be a lot higher so that they are able to dedicate the same amount of time to the training and program as the men do, instead of having to work part or full time jobs on the side.

Women don’t get paid for footy, or if they do it’s very, very minimal, we all literally play for the fun and passion of it. We don’t have any incentives. When I was training with St Kilda full time, or Collingwood back in the day – both with amazing programs. We’d be training/playing 4 times a week. We’d be dedicating our time and energy and petrol money and literally everything we had to be a part of a team and the change in women’s footy. It was 20+ hours of our week we were giving to the club for purely the love of the game.

So even if AFLW remains stagnant in its progression (which I doubt it will), there will always be girls willing to put in the effort to play the sport that they love.

The more sponsors that jump on board and can help fund the sport, the bigger it will get.

The next few years you will begin to see the girls who have been through the women’s academy since the age of 12, and they will be bringing in some real talent. I think the games will become more exciting to watch and there will be a whole new brand of women’s footy coming to light.