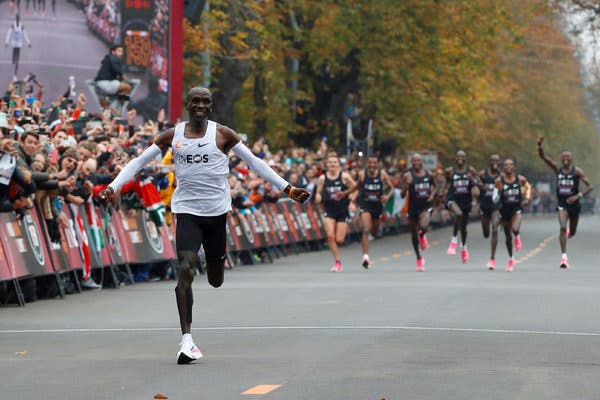 Eliud Kipchoge has achieved what many thought would never happen – a sub-2 hour marathon!

Last Saturday in Vienna, Kipchoge broke the barrier once thought humanly impossible, to join the likes of Roger Bannister (the first to break to the 4 minute mile) and Jim Hines (first sprinter to run sub 10 seconds for 100m) achieving athletic royalty. Now there were many aspects to this attempt, and many reasons why it’s not an official time. But one aspect that peaked my interest is the science behind the footwear worn.

This is not a sponsored post, nor are we endorsed by Nike however, the science that has gone in to designing the shoe that Kipchoge wore has been the biggest leap forward in running shoes in recent memory.

Prior to #breaking2 in May 2017, Kipchoge wore the Nike Vaporfly Elite which integrated a carbon plate in the midsole, sandwiched between different foam densities to increase the propulsion factor to decrease the amount of lost kinetic energy through foot strike. This carbon fibre plate is now starting to change the look and design of many brands and how they attack the marathon. In simple terms, from the previous minimalist trends we are now being graced with “maximalist” shoes.

Saturday saw all of Kipchoge’s pace runners wearing the Nike Vaporfly Next% which is available to the general public for a small fortune. The same shoe was worn by Kenya’s Brigid Kosgei as she thrashed the women’s marathon world record by 81 seconds in Chicago on Sunday. The same shoe that Kipchoge wiped 1 minute and 18 seconds off the official marathon world record in Berlin in 2018.

So what is it about this shoe that has everyone talking?

The relationship between the carbon fibre plate and cushioning is what makes the Nike “Alphafly” and “Next%” so interesting. The Alphafly (which Kipchoge wore on Saturday) houses “four independent cushioning pods (fluid filled or compressed air filled), three carbon fibre/polymer plate layers, two layers of midsole foam – all with a reengineered upper that wicks moisture from the foot and prevents any rain or moisture entering the shoe. Have a look at the image below from Nike’s patent application. A multitude of layers and incredible science which is far above anything seen in this field before. 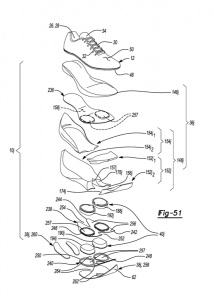 The exact science of how the foam works has not been released, but it’s theorised that the extra foam absorbs the runners load and releases it in conjunction with the carbon plates to add more spring to the runners stride and offload the calf musculature. By reducing the load on the posterior chain, we can decrease the chance of injury and increase our muscular endurance.

New Balance, Hoka and Asics are all starting to join the carbon fibre party with shoes showing an increase in the bevelled heel and wider than normal forefoot regions. It seems that maximal is here to stay – for now.

I may be a podiatrist and an avid runner but this is sports science at its very best. I’m very excited to see what happens in the near future and fingers crossed we see some incredible times in Tokyo in 2020.

If you’d like a further breakdown, head to https://www.believeintherun.com/2019/10/09/a-breakdown-of-the-nike-kipchoge-prototype/