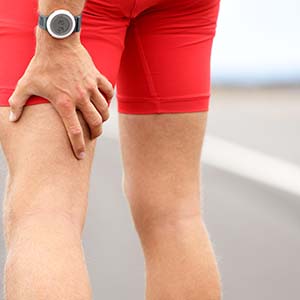 10 DecWHAT DOES YOUR HAMSTRING TIGHTNESS TELL US ABOUT YOU?

In order to strain a hamstring, you usually have to be sprinting hard, slowing down fast, changing direction sharply, or kicking. Overstretching is also a common mechanism which can occur at slower speeds. As the hamstrings simultaneously control of both the hip and knee joints, they are deemed more at risk of injury than those muscles acting on a single joint.

There are a multitude of factors contributing to injury of the hamstrings. I often hear patients report of tightness in the hamstrings, or an inability to touch their toes, but do you really just have tight hamstrings? Contrary to popular belief, hamstring tightness is only a small contributor to hamstring strains, there are many other more prevalent factors.

• Poor co-ordination and eccentric strength This is probably one of the most typical causes of hamstring injuries. Inadequate activation patterns of certain muscles cause increased load to be placed on the hamstring. For example, poor gluteal contraction forces the hamstrings to become the prime mover in hip extension, on top of its usual role, causing fatigue to set in more quickly.

• Poor running mechanics Overstriding or poor pelvic control, puts the hamstring in a lengthened and loaded position at initial contact.

• Neural tension Neural tension refers to the amount of strain on a nerve with rest and movement. An abnormal increase in neural tension in the sciatic nerve can occur if the nerve becomes caught or restricted anywhere along its path, preceding the hamstring such as, the intervertebral foramen or gluteal muscles.

• Muscle imbalances For example, hip flexor tightness causes the pelvis to rest in an anterior pelvic tilt, maintaining the hamstring in a lengthened position.

• Low back pain Lumbar disc issues or stiffness often present with referred pain, tightens, or numbness / tingling into the legs, especially within hamstrings.

• Playing surfaces For example, a wet, slippery surface will put more strain on the hamstring due to instability and slipping.

The above is by no means a comprehensive list of all factors contributing to the incidence of hamstring injuries, but cover the majority of modifiable risk factors found in the research.

Remember that one of the most conclusive risk factors is a history of previous hamstring injury (Hagglund et al., 2013). Those in this category need to address as many of the modifiable risk factors present, to reduce their risk.