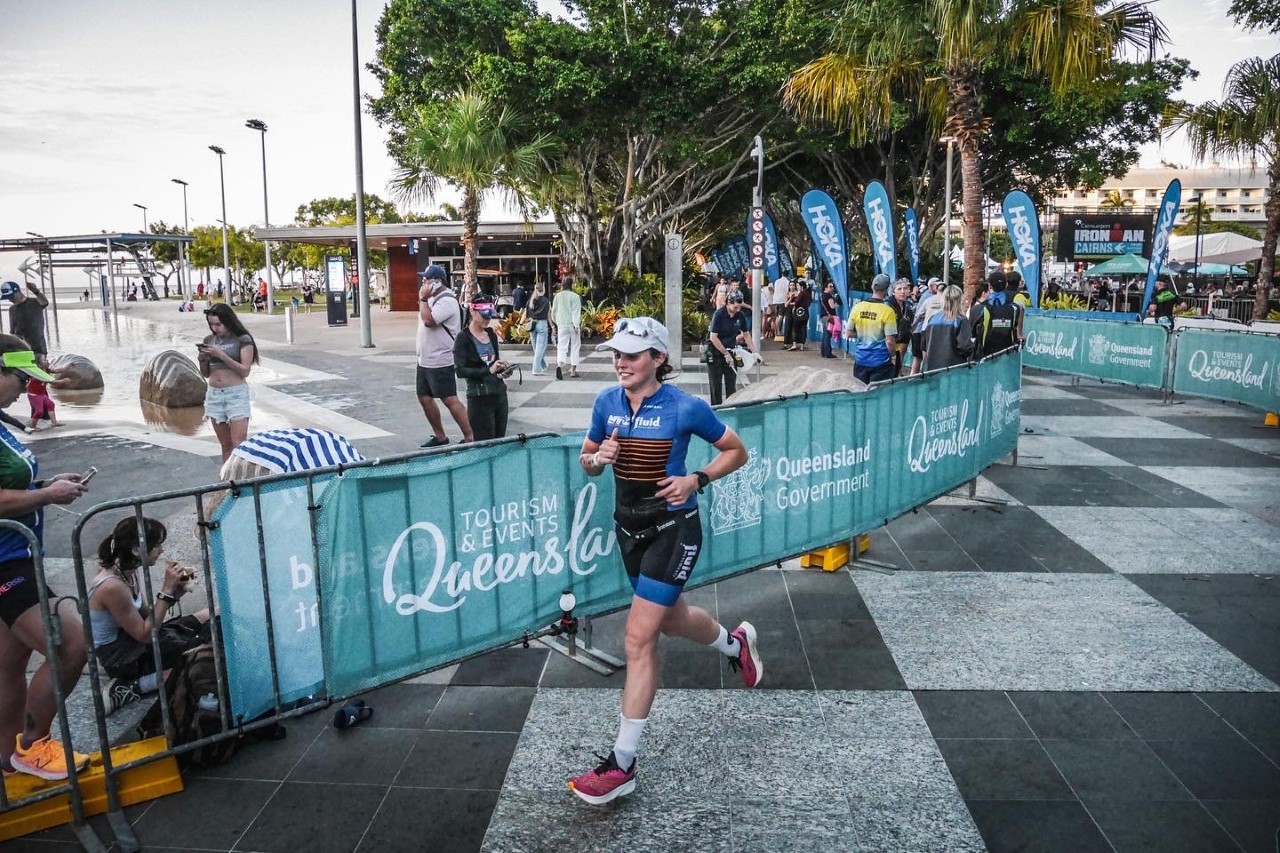 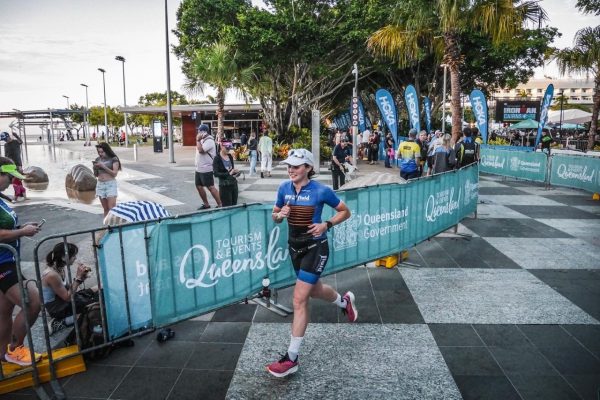 My partner and I arrived in Cairns on Monday 6th June, 6 days prior to the race. It was 30 degrees, humid and I was feeling so happy to be out of Melbourne as the cold weather had just hit.

Our bikes arrived all in one piece and we were feeling ready to spend the week freshening up and acclimatising to the heat.

The few key things I did that week to prepare for race day included:

As the days passed, my body started to feel more and more fresh, my legs felt light running and I felt prepared, the taper had done its job!

Race morning arrived and I was happy to see the water conditions of Palm Cove Beach had eased compared to the previous few days which were rather choppy. There was still some chop but I felt good about the swim ahead. The course was 2 rectangle laps heading out and then across to the pier and back. The final stretch to the pier is with the ocean’s current, I enjoyed this section of the swim. I decided to start near the front of Zone 1, I had a male squad member beside me who is of a similar swimming ability and we were hoping to swim together.

The gun went off and the race had begun! I felt this was one of the calmest swim starts I had ever had. I knew I wanted to build into the swim and I felt so much less pressure than usual as it was a long day ahead. I had been told the swim would feel like forever, but I really didn’t ever get that feeling. I felt a lot stronger on the second lap and decided to pick up the pace with about 1km to go. I swam past another fellow squad member and kept weaving my way through swimmers. As I got out of the water I could hear my family cheering and the voices of Fluid Movements squad members! I looked down at my watch and I was rather happy with my time, I didn’t feel I had burnt any matches- it was a comfortable swim.

I ran under the showers and into transition, a kind volunteer helped me unpack my transition bag and I quickly ripped off my wetsuit. I was offered a face wipe and thought, “random but okay I’ll take it” only to find out later my face was covered in sea grime/mud… I took a few deep breaths as I ran to my bike.

I ran out of transition towards the mount line, there was a lot of cheering but I couldn’t see any faces. I saw my coach up the road who said I had a good swim as times had been slower across the field. My plan for the bike was to start out feeling strong and hold a moderate effort. I was riding to power and HR zones, however for the first 15km I let myself settle into a good rhythm. I was feeling good on the bike straight away, comfortable. I had a gel initially that didn’t go down so well so I started sipping on my Infinit nutrition drink. I found myself having to hold myself back for quite a lot of the bike, I let my power go over my range by 20% up gradients but on the flat I was having to concentrate on not riding too hard. Everyone had told me not to over-bike.

One of my coach’s favourite quotes is “Ride for show, Run for dough”. I really enjoyed the bike, the scenery was amazing, the roads were windy and fun and my nutrition was going down well. I dropped a chain after the first lap going back towards Port Douglas and annoyingly had to get off my bike to put it back on. I remained calm and didn’t let it bother me. As I turned at Port Douglas the wind picked up, I found this back section the most windy and put my head down, again being careful not to push too hard.

Coming into Cairns, I was super excited to get on the run, however I started to feel a sharp cramping in my abdomen and hoped it would disappear once I got off the bike.

I accidentally got changed in the Male transition tent which put a few smiles on faces. I didn’t care I had already sat down to put my runners on and I wasn’t moving. As I headed out on the run, the pain in my abdomen increased and I was struggling to take deep breaths, I think I was having a diaphragm spasm. I had been dealing with this issue recently in training and I knew it usually resolved.

In the first 2km I had to briefly stop twice to stretch out my rib cage. I did go through a moment of panic and tears welled as I ran past my coach and squad “I can’t breathe, my diaphragm”. Luckily my legs were good and I was still holding a good pace.

Even luckier, by 5km I came good and the pain disappeared! My plan for the run was to go out at a moderate intensity and stick to a certain HR zone, I settled into rhythm. I really enjoyed most of the run, I couldn’t stop smiling the whole time. I never went into a ‘dark’ place I had been warned about, rather I told myself to just keep ticking over the legs, focus on the present and don’t stop. When the 33km mark hit, my quads were really feeling it, my pace and my HR dropped as my legs fatigued but I didn’t mind. I didn’t know I was winning until about this mark and I was told I had a 6minute lead which was nice to hear. I told myself to finish before dark and enjoy the last lap.

Crossing the finish line was very emotional, I was crying as I ran down the red carpet and to my surprise my partner was waiting for me at the end to give me my medal! Even better was taking my spot to Kona to race the IM World Championships alongside my partner.

My recovery over the past week has involved no training, light walking and stretching and enjoying an occasional sleep in. My build for Kona starts next week and I am feeling really motivated (even though during the IM I said I would never do this again haha).

Thanks Team CSSM for the support, I am looking forward to my fortnightly massage in the build to Kona!

Jay Smyth-Small has been working with Shai over the past 3 months. She has been coming to the clinic every fortnight for treatments to help improve performance. We had been working on a number of issues leading up to her Ironman event in Cairns. Shai had been having some problems with her tibialis posterior muscle when completing some of her longer runs. We focused on dry needling and deep tissue massage to help desensitize this muscle and also to help combat DOM’s in other muscle groups that set in after an extensive week of training. Shai managed to win the event in her age group and complete her marathon at a 3:35 pace after a grueling 6:45 mins combined swim and cycle!!

TeamCSSM athlete Shai O’Brien has been competing in triathlons since she was 15.

She has since raced 10 half Ironmans and competed in multiple Sprint and Olympic distance events at the Gatorade/2XU series. The Ironman Cairns was Shai’s FIRST ironman.
Somehow, Shai trains up to 20 hours a week while also working as a nurse and midwife at the Royal Women’s.