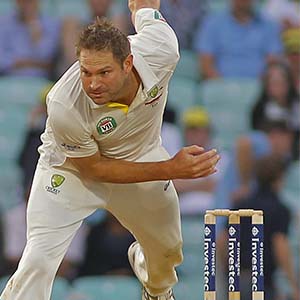 The news this week has been dominated by Australian cricketer Ryan Harris’ announcement of his exit from the 2015 Ashes tour and his subsequent retirement from cricket. This was following the decline of a chronic knee injury he sustained in the tour match against Kent. In the wake of this announcement, it would seem fitting to talk about training loads and their effect on injury risk. Many studies have shown a strong relationship between training loads and injury rates, with increases in load resulting in an increase in the rate of injury (Rogalski et al., 2013). Despite this, emerging evidence is indicating that high training loads may not be the cause of injury, but rather spikes in training loads are the real culprit. Calculating training load Training load = training volume x training intensity For example, consider Sally, an amateur runner who trains 4 times per week, for 10km at 70% effort. In order to calculate Sally’s training load: Training load = training volume x training intensity Training load = 40km x 70% Training load = 2800 What does this mean for you? In order to decrease your risk of injury, it is important to avoid spikes in training load and ensure that you are increasing your load in a safe and effective manner. 1. As a general rule, training loads should not exceed more than 10% per week. This percentage tends to lower as your training load increases. If, from the above example, Sally wished to start increasing her training load, she should be aiming of a training load of 3080; 10% of training load = 2800 x 0.1 = 280 Total training load = 2800 + 280 = 3080 Sally can do this by either increasing her distance OR intensity but not both. 2. You need to be especially careful following periods of rest (or enforced rest due to injury) as this is when your training load can spike significantly, putting you more at risk of injury. 3. Listen to your body, the presence of pain can be an indication that the workload is too high. Managing training loads is as much an art as it is a science. Although the above formula provides an accurate way of measuring training loads, it is important to consider that each individual will respond differently. In the case of Ryan Harris, and his decision to retire from cricket, it can be safely assumed that the demanding training loads of international cricket, in conjunction with an underlying knee condition will have been an influencing factor.