If you’re like us, the hot summer nights have been spent watching the world’s best tennis players in the Australian Open.

No matter the ranking, anything can happen in a Grand Slam. For 107th ranked Harmony Tan, her Oz Open campaign ended in the second round with the Frenchwoman leaving the court in a wheelchair after she suffered a calf injury in the deciding set.

Despite Tan and her fellow athletes being at the top of their game, it’s proof no one is exempt from injury.

The relentless agility requirements, fast reactional plays and the physical power in every shot make tennis a very demanding sport, not to mention the games upon games athletes must fight for night after night. As such, it is not surprising the athletes can experiences some niggles and injuries. In fact, previous injury analysis has suggested that injuries in tennis are more prevalent compared to other sports, including rugby and basketball.

There are similarities in injury patterns between the different grand slams, but due to differences in competition environment, such as the Plexicushion surface and the climate of Australian summer, the risk to athletes can vary.

Let’s take a look at a brief history of Australian open injury patterns through the biggest available study of the competition between 2011 and 2016.

Here are some of the key findings:

Let’s look at why some of these patterns might exist

Differences in sex are thought to be related to the differing physical, technical and tactical differences between male and females. For example, lower limb injuries may be more common amongst males as the absolute movement demands are typically higher.

It is not surprising that muscle injuries are the most common type of injury. The two main types of muscle injury include a strain and overuse. A strain describes when disruption of muscle fibres occurs during an acute episode which results in pain, loss of power and occasionally the feeling of a pop. A muscle overuse injury can occur over time with repetitive loads and inadequate recovery and is typically predated by aches and pains of a similar nature. Research tells us that strengthening the key muscles is the best way to reduce this risk. While stretching and mobility can help the athlete, particularly with shots that really make the players reach and stretch, strengthening should be the cornerstone for muscle injury prevention.

Back and neck pain is one of the most common complaints that people present to private practice with. The study suggests that these regions also placed a significant demand on medical resources amongst the athletes. Low back pain is a very complicated issue and is highly multifactorial in nature. One contributing factor to this is physical activity, which is thought to be described as a U-shaped relationship: 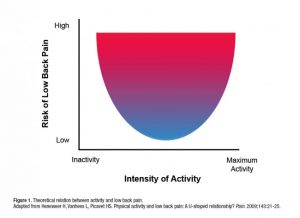 This theoretical model suggests the existence of a relationship where physically inactive individuals tend to experience a higher risk of low back pain, which reduces with physical activity (including aerobic exercise, resistance training, Pilates to name a few ways). However, the risk of back pain can increase once again when physical activity starts to reach the extreme, athletic level. A reason for this may be that due to the high training volumes and high intensity – the body has a harder time to sufficiently recover over time leading to eventual break down.

We can bet that significant time and effort is put into injury prevention and rehabilitation in the off-season to keep the athletes on the court. Most athletes dedicate their life to training, and have their schedules dictated by what needs to be done to be the best. Without it being our full-time job, how can we reduce the risk of injury at the sub-elite and casual level?

Two simple and effective ways to manage injury risk that applies to all level of competition include:

This is one of the best things we can do to reduce the risk of most types of injury, including muscle, joint and bone ailments. Being active in a plethora of ways can be a very helpful tool to help with an overall sense of resilience and movement variety. However, it is important to note that this should be an adjunct to a specific and relevant program that strengthens the muscles in the way they are utilised on the court. For example, we know that the arm muscles and joints work together in what is called a kinetic chain, and as such should be trained in a similar manner.

Ensure the load (i.e the amount, intensity, frequency of tennis) is appropriate to your level and is built up over time

This can be done very precisely in the top-flight competitions with regular monitoring of athlete condition and high availability of medical resources. A simpler way to do it is to keep a loose diary including things like total time playing, perceived intensity of the game, rest breaks and other types of training. This is an easy way to get an idea of a benchmark to then be altered depending on how you feel. It is always easier to start smaller and less intense and build up over time.

If you’d like to know more about how you can monitor your training load no matter what sport, speak to one of our CSSM practitioners.

CSSM physio Hugh Feary enjoys helping others who have any niggles or injuries to modify their program to keep them moving.

Hugh has previously worked in GP clinics and private practice as well as a variety of local sporting teams including the Fremantle Dockers in the AFLW.

Away from the clinic, Hugh enjoys music – particularly cello, drums and guitar as well as reading and strength training.

The effectiveness of exercise interventions to prevent sports injuries: a systematic review and meta-analysis of randomised controlled trials

Prevalence and risk factors for back pain in sports: a systematic review with meta-analysis