12 AugAchilles tendon rupture – to surgery or not to surgery, that is the question

Australian heart break: If you were like most of Australia glued to the Olympics over the recent weeks, you may have seen Australian steeplechase athlete Genevieve Gregson suffer an Achilles tendon rupture during the final water jump in her medal race.

The scenes were devastating with Genevieve falling face first onto the track and unable to continue.

We now know that Genevieve will be having a surgical repair on both her achilles (she actually injured her “good” achilles).  But this is not necessarily the path for everyone.  It would be easy to think that since the tendon has been fully torn, it must be repaired surgically to ensure it heals.

But recent evidence has demonstrated that this is not necessarily the case.

Let’s have a look. 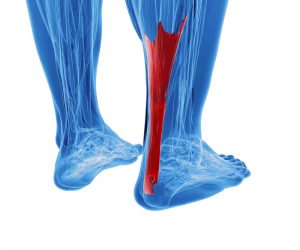 What is an Achilles Tendon rupture?

The Achilles Tendon is a tendon that connects the major calf muscles to the heel. This tendon plays a role in most of our movement, including propulsion while walking and being the driving force in explosive movements including running, jumping and hopping.

A rupture occurs when there is a complete disconnect of this tendon, usually following a traumatic incident, which is predictably very painful and debilitating. This is a very significant injury, so much so that some studies report only 50% of patients returning to their pre-injury level of sport. Patients can expect at least a year long recovery, with some patients not achieving a complete return of strength and function despite extensive rehabilitation.

This injury most commonly occurs in middle aged males during a high force mechanism, particularly in situations where the Achilles has to absorb force, such as forcefully stepping back during sport or landing from a jump.

Surgical and non-surgical management have many similarities in outcomes

In surgical management, the tendon is pulled together and sutured. After this, the management plan is similar to non-operative management, including a period of wearing a rigid brace for roughly 6-8 weeks with a raised heel, and then gradually progressing mobility and strength of the ankle.

Recent research has recommended early rehab and weight bearing in both approaches, even as early as day one, which is thought to improve outcomes. This is because early, controlled loading stimulates collagen and the tendon healing process.

Both management pathways seem to see very comparable results. Both approaches see a similar rate of return to pre-injury activities, and recent evidence also suggests that there are no significant differences in functional outcome or quality of life 6 and 12-months post injury. One study that followed up patients over a 15-year period showed patient satisfaction and reported functional outcomes were no different between groups.

Differences between the management pathways

While there has been promising research demonstrating the potential of non-operative management, this does not mean EVERYONE is suitable to attempt conservative care. Below are some of the differences between management pathways and some considerations that are important in the decision process.

It is important that the management decisions are made in conjunction with your physiotherapist, doctor and surgeon due to the complex nature and severity of this condition. As you have just read, it is not as simple as saying one method is superior to the other. The individual, injury severity, past history, level of activity and personal preference will all factor into the final decision.

We are all wishing a speedy recovery for Genevieve Gregson to hopefully see her do what she does best in Paris!

Hugh Feary is a CSSM physio who has previously worked in GP clinics as well as a variety of local sporting teams including the Fremantle Dockers in the AFLW. Spending a lot of time strength training in the gym, Hugh enjoys helping others who have any niggles or injuries to modify their program to keep them moving.